After an amateur attempt at trying to calculate the BC of the Norinco 7.62x39mm ammunition, I thought I would do the same thing with Norinco’s 7.62x51mm ammo. As one would expect, this stuff is fairly inexpensive as well, running aroun $0.50/round. I don’t think this is “precision ammo”, but it works well enough in my rifle. 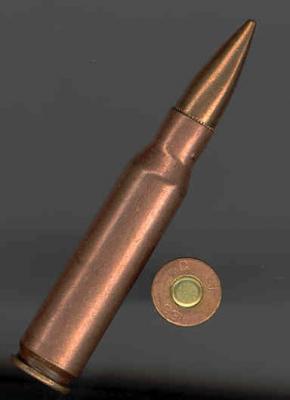 First off, I pulled one bullet apart, and weight it. The projecticle itself weight 146.1 grains, so I guess this is supposed to be 147gr ammo. I measured ~ 42.0 grains of “mystery gun powder”.

First some environmental data that I recorded while I was at the range (or looked up on Google Maps) earlier this week:

Next, after firing 19 (well, it was 20, but only 19 shots were recorded by my chronograph) rounds through my M-305, I collected the following information:

I’ll omit the velocities from the flight of the bullet, we’ve got enough boring numbers. So running these numbers through the JBM BC calculator and we get the following two BC values: